The board usually meets about every other month. October’s meeting took place on the 27th in the back room of Crazy Horse. All of the elected officers (Jim Schroeder (pres), Walter Smith (VP), Stan Ellis (at large), Jerry Arveson (treasurer), and Kathy Cummins (sec)) were present and most of the committee chairs as well.

Kathy Cummins’s minute of the last meeting were approved. Treasurer Jerry Arveson reported briefly before having to leave for another commitment. Club finances are in good shape with a good balance in the checking account in addition to our “rainy day/large grant” savings CD.

Education and Safety Chair Andrew Dingman reported that he is looking for “teaching opportunities”. A few ideas were discussed. The idea of sending out links to educational videos on riding issues sounded especially promising. Maybe also a “Bike Tip of the Week.”

Ride Coordinator John Bassett gave an overview of the past season. He observed that our official season now runs during Daylight Savings Time. He reviewed midweek and weekend rides. We were especially happy with the Beginners Ride run by Tammy Thompson. All Saturday rides had official leaders this year. The iRide and Training groups will continue as one group. OWLS continues to meet separately. Sunday Nice and Easy rides continue to do well under Ron Brown’s guidance. A few drive and ride events will be scheduled for next year. The double century is being planned to go from Evansville to Madison, requiring an overnight stay in Evansville, and will not be so inviting to riders who want to do a shorter options. Jim Schroeder is organizing some gravel rides in November. He will post them on the ride calendar.

Mountain Biking Chair Dan Hickey spoke briefly about upcoming ride plans. If there is enough interest he may have some MTB training sessions this winter.

Marketing Chair Yusef Nur discussed two matters. The results of our recent club slogan contest were not so compelling, but will be useful. A new idea “Break Away with the BBC” was approved as our primary slogan. Second was the issue of possibly sponsoring one or more Little 500 teams. After a fair amount of discussion it was decided instead to purchase a half-page ad.

Membership Chair Tammy Berger: Membership steady. From this point on all new members will be credited with dues paid tfor 2015-2016, since the 2014-2015 riding season is now over.

RAIN Chair John Connell. Ridership was down a bit (like in other rides such as Hilly Hundred and due to so many other new rides and to other sociological factors beyond out control). Nonetheless our profits held steady because of much tighter control on some of the expenses. The committee has reviewed the last year with a view toward improvements. Preliminary steps are being taken to open registration for RAIN 2015 in January. 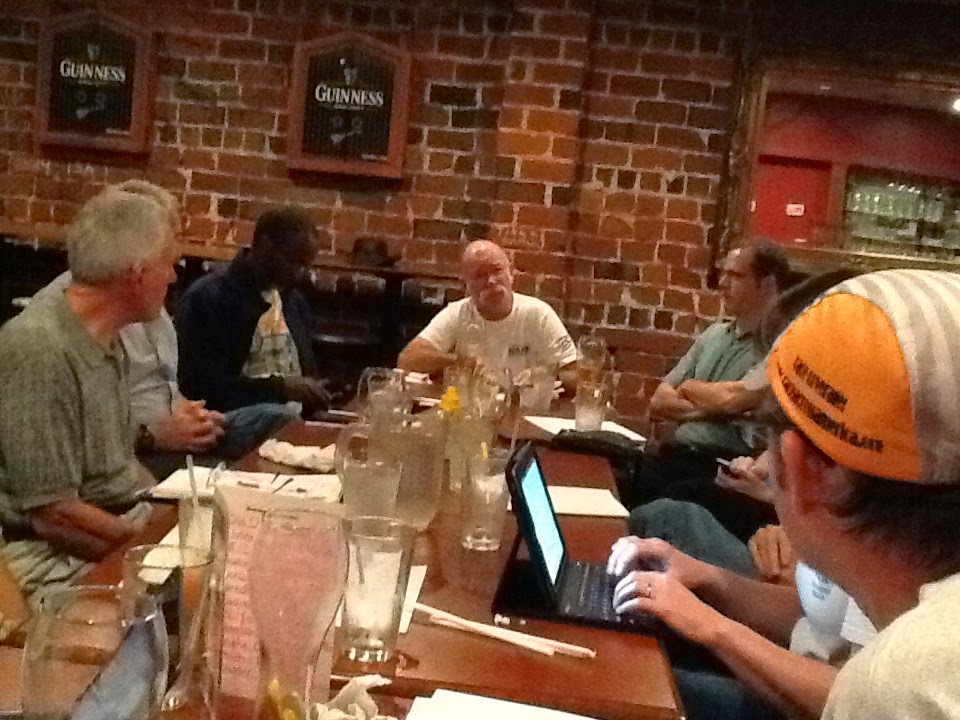 Grants Committee work is underway, Chair Brett Nelson was unable to attend the meeting but had reported that additional committee members are needed. Contact Brett at pyromelana@comcast.net if you would be interested in serving on this committee that oversees the entire grant process and makes grant recommendations to the board. The target date for receipt of grant applications is the end of the year.

The board approved gift cards for people who led rides this year. The board also approved honoraria for the main RAIN committee chairs as a small recognition of their important and time-consuming work.

A club pizza party is being planned for November, probably the 18th at Café Pizzeria. The club will pay the cost. Also we selected a tentative target date for the winter meeting of either February 7 or 21, depending on space availability. We will need to appoint a nominating committee by the next board meeting.

The meeting adjourned about 8 pm.