Four riders who are all rather knowledgable of southern Indiana country roads drove down to Heltonville for a midweek century titled “Houston Skyline Weave”.  Little did they know all their expertise was needed on that fateful Wednesday.

They all got started on that muggy morning at Damon Bailey’s old grade school southeastward on IN-58.  There’s some history and explanation on this particular route.  Back when IN-58 had a bridge out and the nasty chip n seal was laid on IN-135 Jim Schroeder decided to do some investigating for some country roads as an alternative. This route weaves those highways plus much too busy US-50. As the Nashville 90 route is on relatively flat roads, these weaving roads are not! 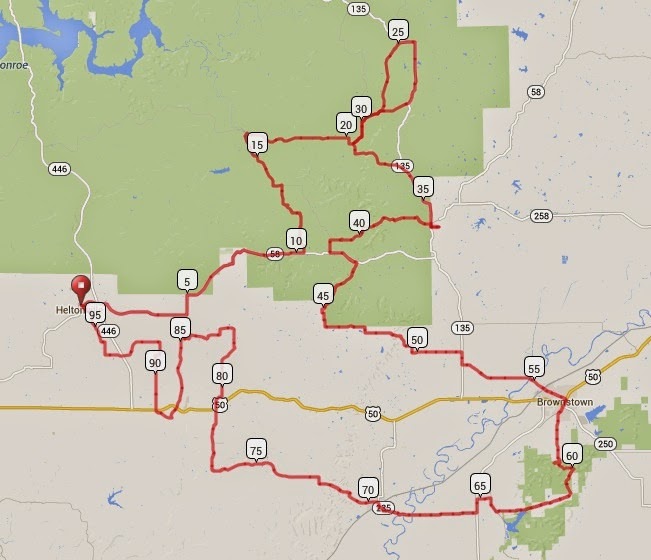 After riding through Norman and speeding down through Norman Woods, we all turned east halfway up the climb a couple of miles before Kurtz for our first weave.  This would lead us toward the western trailhead of Nebo Ridge on some good paved roads of Jackson County.  You might be familiar with them if you ever rode Seymour’s Ride to Recycle or Brownstown’s Round Barn Ride.  Unfortunately, due to last year’s harsh winter, there were a few stretches of gravel road magically appearing amidst good pavement otherwise.  After approaching the third stretch Mark Napier had had enough of this gravelly groove, and so he and Joe Anderson and Stan Ellis decided to backtrack to uncharted and new blacktop beckoning.  The classic cyclist that he is, Jim, forged onward on the designated route, and did find a fourth stretch of nasty, big, and ugly gravel.  The icing on the cake was five miles of some week old chip n seal all the way to Houston (how’-sten according to the locals).

We planned to meet at Spurgeon Corner at mile marker 25.  Joe’s Gang found some good pave’ but came upon the same chip n seal before Houston.  Joe actually scouted Jim’s tire tracks in the dust of the ground up chips, as there wasn’t much seal in the mix.  Their route had added a couple of miles as Jim had waited at the now closed corner store.

We returned to Houston on a different route on Buffalo Loop for our second weave and then headed to Freetown on Houston Road with a radio tower climb in the middle.  Racing down to IN-135, the road crews left us a smooth as silk blacktop almost causing us to forget the past chip n seal and gravel.  We were hungry enough to all have sandwiches at Freetown Grocery just before the lunch crowd came in.

The next weave crossed IN-135 and onto Kurtz via a hilly road up to a church and cemetery, but awaiting us on the other side was a car rally-esque descent to the town.  After a couple of miles past Kurtz, we then crossed over and travelled “up” to Clear Spring and rode some on this plateau bounded by highways 58,135, and 50.  Jim was describing another great switchback descent down towards Brownstown while on some half mile patches of new blacktop, but all of a sudden fresh chip n seal greeted us at the start of the great descent. We had almost forgot!

We dusted off at the Brownstown Huck’s and then rode up the now famous switchback up to Skyline Park.  Famous, as it is the easiest of the three ways to get to the top for a view of Brownstown: 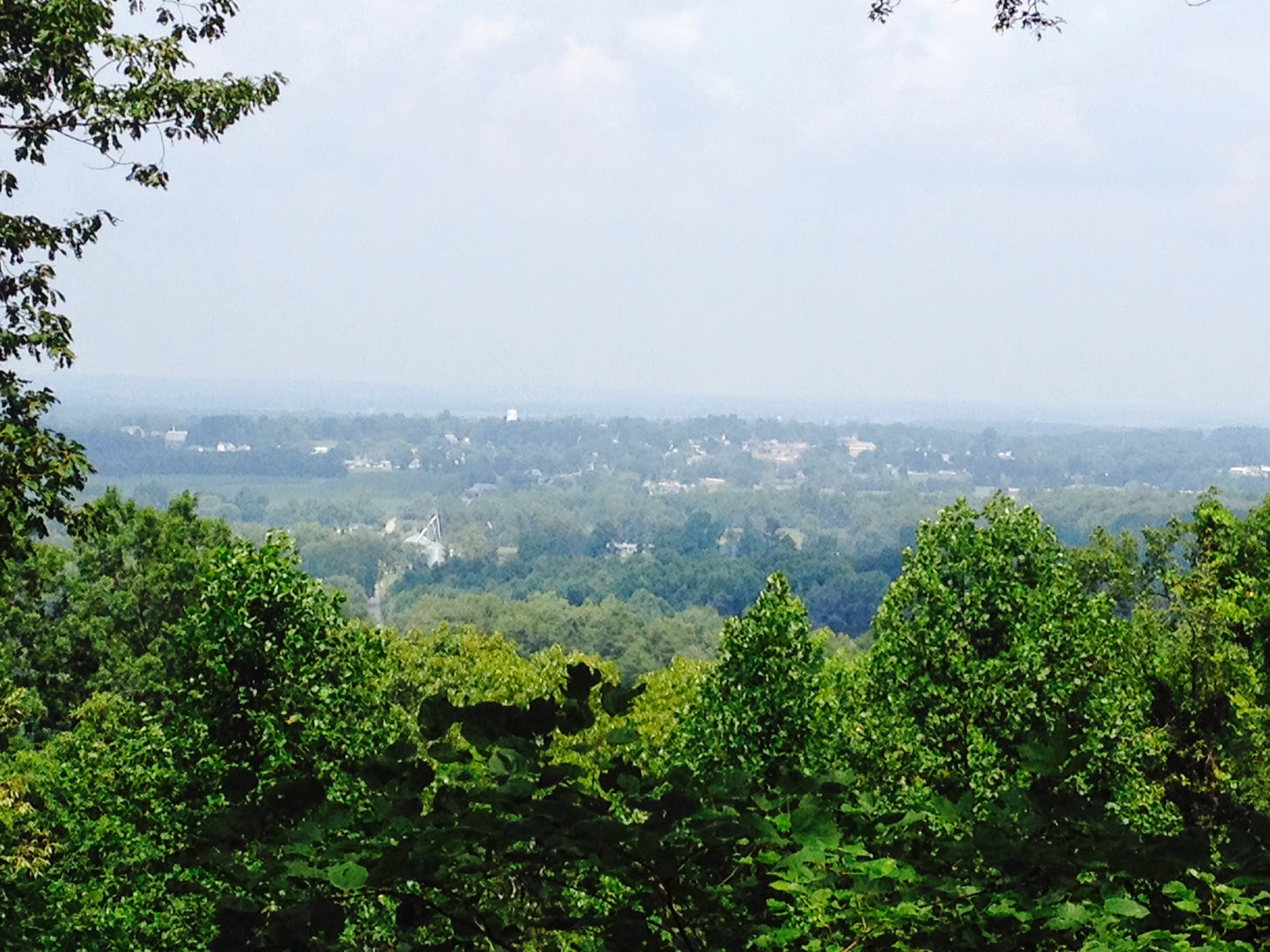 Approaching Medora from the east, we rode thru the triple trussetted covered bridge, and stopped for some flavored ice cream cones at the popular c-store in Medora to prepare us for the switchback up and out of the dismal little town, now made famous from a PBS documentary.  Stan mentioned that Joe always has some good edible strategies while frequenting all possible stops.

When we approached the next famous Medora switchback a white dusty road greeted us, and we retreated along the river toward Fort Ritner. After a few miles we were again ambushed by those gravelly road crews again.  We escaped northward and made our way up to Old Highway 50 and proceeded to Leesville.

We did skip the next weave and stayed on the old highway and then crossed US-50 and onto to the always fun and windy Mundel Church Rd.  In order to make up for the skipped weave and get closer to 100, Joe suggested that we go westward all the way to Shawswick and onto IN-58 and a very nice stretch of windy downhills as we headed into Heltonville. 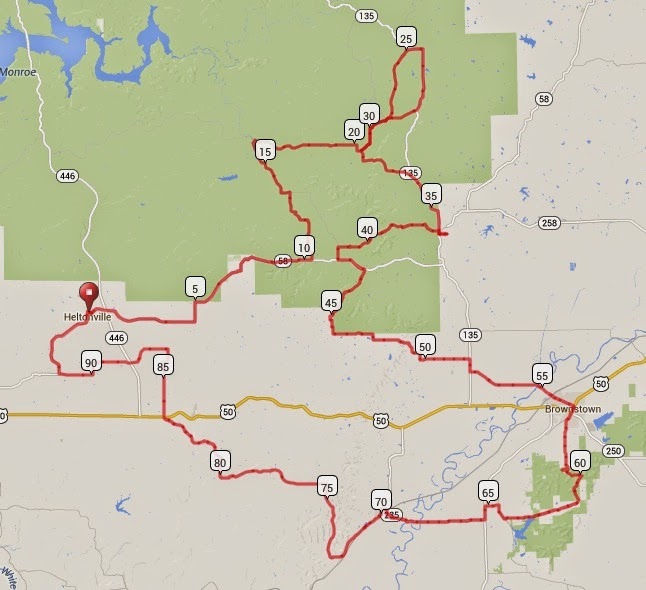 Usually when one rides in the Brownstown area, the bicyclist needs to worry about the always flooding White River. That wasn’t the concern this past Wednesday.