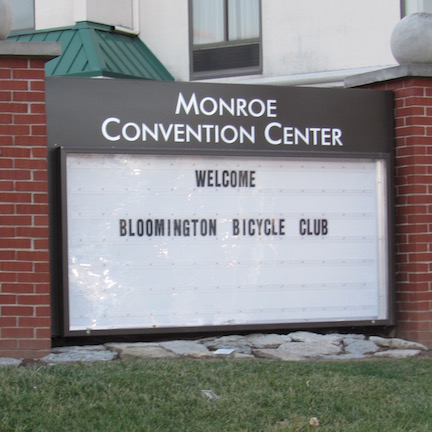 Saturday evening, February 25, marked the BBC’s annual meeting and banquet held at the Monroe County Convention Center. Just in time for the 2017 ride season, which begins the first Saturday in March! A really good crowd showed up and, indeed, a couple extra tables needed to be set up to accommodate everyone. Along with an appetizer salad we had the business meeting portion of the evening, presided over by President Jim Schroeder, including re-election of officers whose 2-year terms were expiring and who agreed to run again. The full list of elected officers now is Treasurer John Kalill gave an overview of club accounts, which have healthy balances, to fund RAIN expenses ahead of the event, club functions, grants, and additional funds available to be targeted toward special projects.

John Connell, RAIN Director, gave an update on plans for the 2017 Ride Across Indiana, scheduled for July. The main subcommittee chairs include

Lots of volunteers are needed to make the event a success. Contact Yusuf! After dinner Yusuf Nur, chair of the Awards Committee, emceed the awards ceremony, with 13 honorees being presented special plaques suitable for desktop display. Now in its second year, the Awards time has become a special tradition for the club. The presentation of the actual awards was preceded by the announcement of several tongue-in-cheek “raspberries” for several riders who had various misadventures on club rides. Curiously, despite the good attendance at the banquet, none of the raspberry winners were there!

The meeting concluded with an overview by Jim Schroeder of planning issues related bicycling trails and routes in and around the city.

More photos have been posted by Mike Finger and Warren Smith to the BBC Facebook Group  and to the Evite page for the event.

TUESDAY:
Four training rides to choose from. Pick the group that matches your riding style and pace.

THURSDAY:
Ride with your favorite training group and really improve yourself.